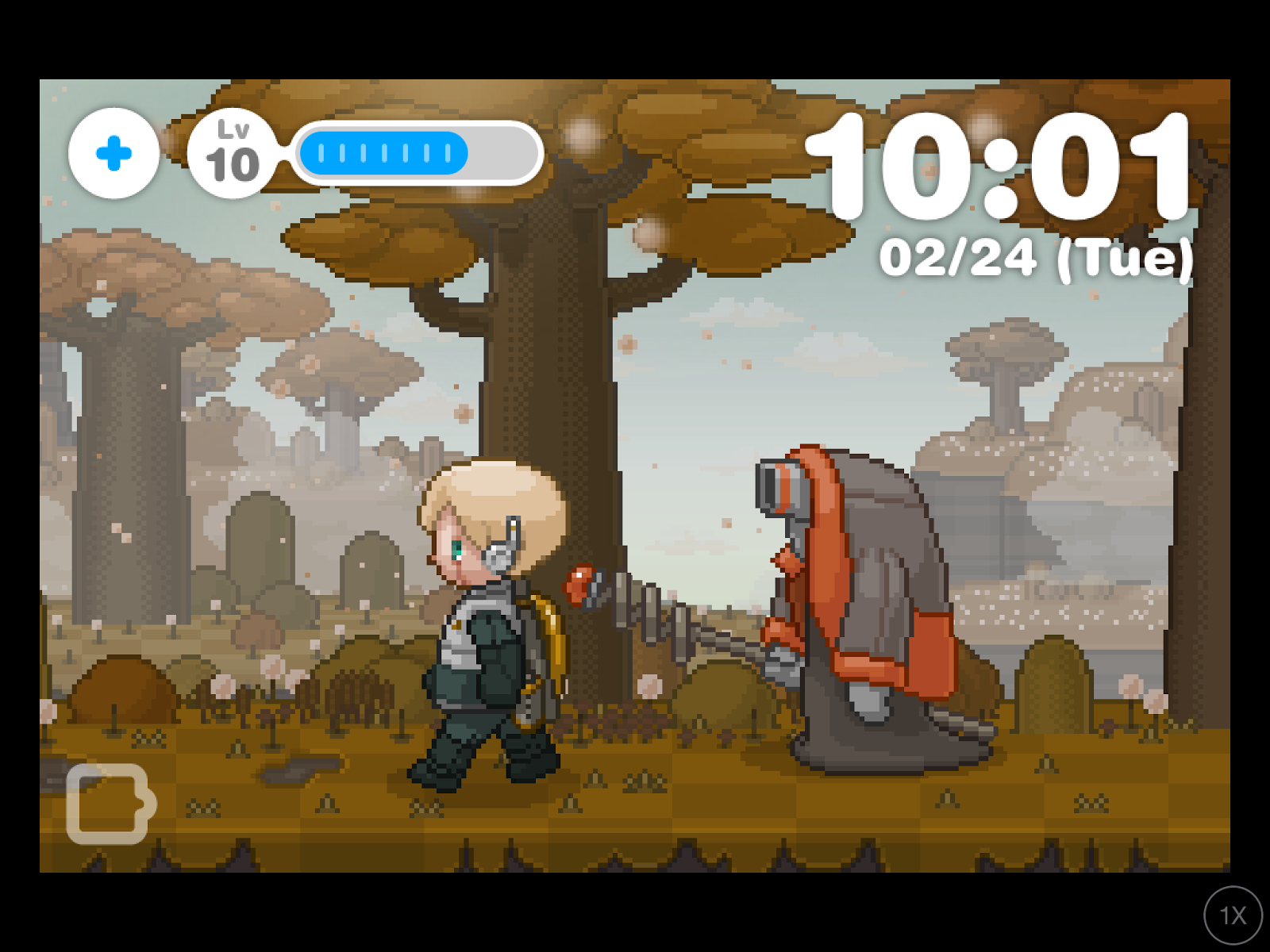 March was a tough month for me. Deadlines, projects, and commitments coalesced into a critical mass that wrecked any chance for free time and recreation. For over a month I woke up early, worked all day, and came back home only to sleep. So imagine my curiosity when I learned about a game advertised as “For you who don't have the time to play RPG anymore: Alarm Playing Game.” The game in question is Dreeps, a Japanese iOS game released in 2015 and developed by Hisanori Hiraoka, Daisuke Watanabe, and Kyohei Fujita. 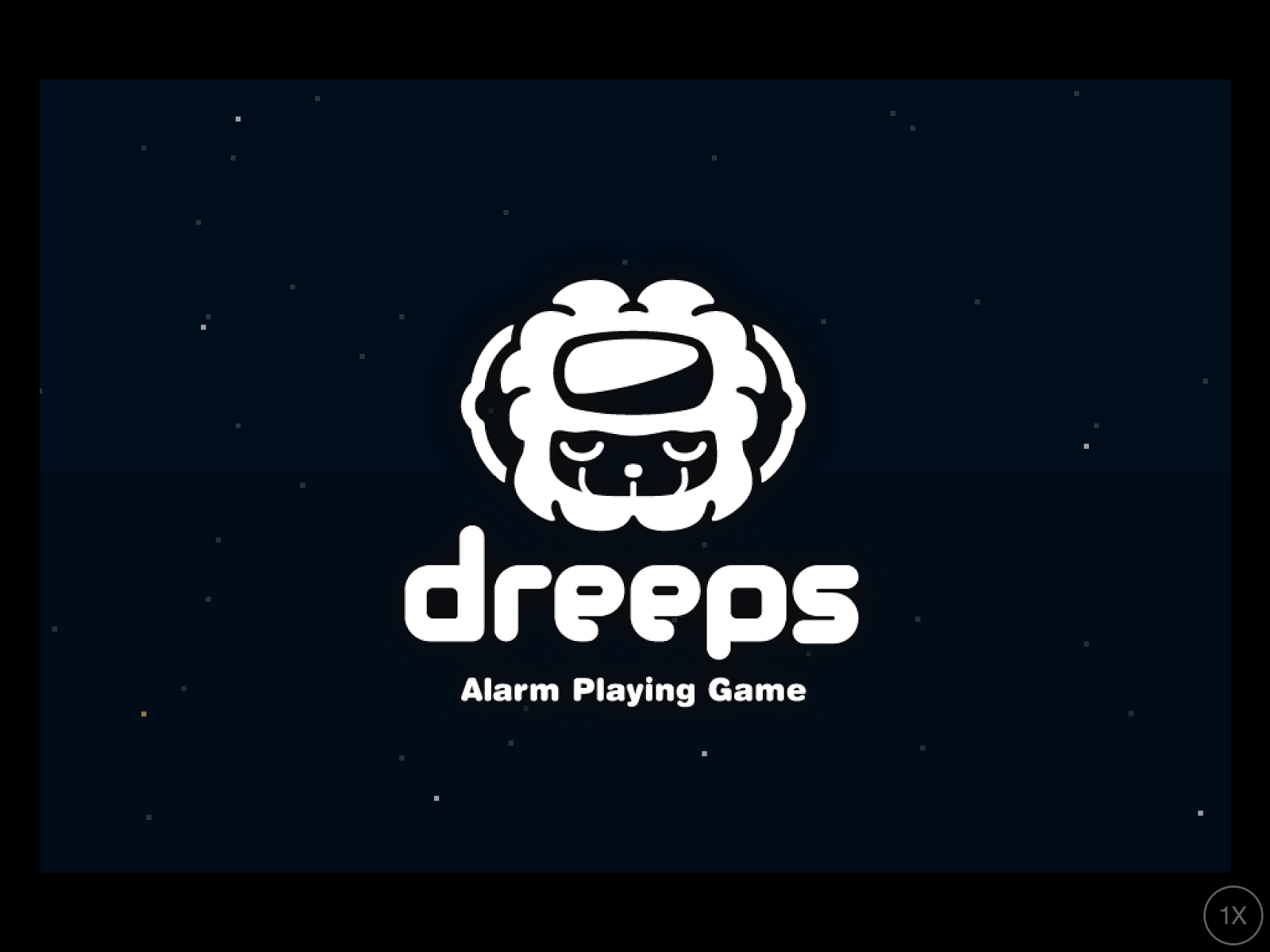 An “Alarm Playing Game” for people who haven’t got time to play games sounds vague but that’s exactly what Dreeps is. It’s a game where your primary interaction is to set an alarm (and wake up more or less when the alarm sounds). It’s also a role-playing game at least aesthetically if not formally; you have next to no say in character development, narrative choices or even the outcome of random encounters. Everything looks and acts exactly like a JRPG, but what you actually do is watch and sleep and maybe dream. And set the alarm every night. 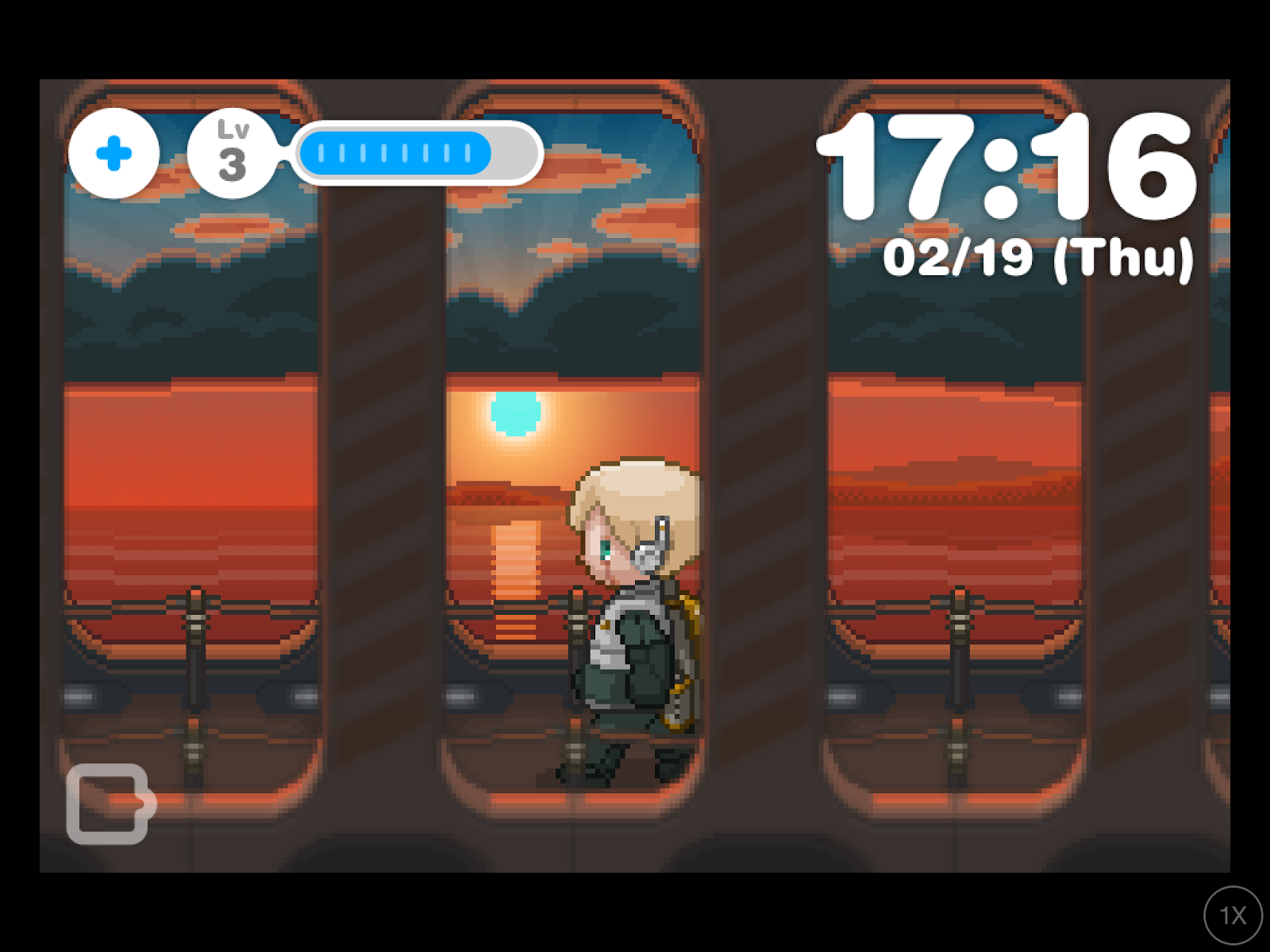 Every day your character walks down a long winding road. There are no push notifications or alerts: you check in on your character whenever you want and sometimes something happens when you do so. Mostly it’s just the road and the occasional random battle though. Every evening at a set hour (later into the night the higher your levels get) you have a boss battle that rewards you with a new party member. That is, mechanically speaking, a new alarm to set. And if your little android protagonist loses a battle any time during the day whether you were looking or not, it slumps down, all tired-looking. You can help it back up by tapping on it. 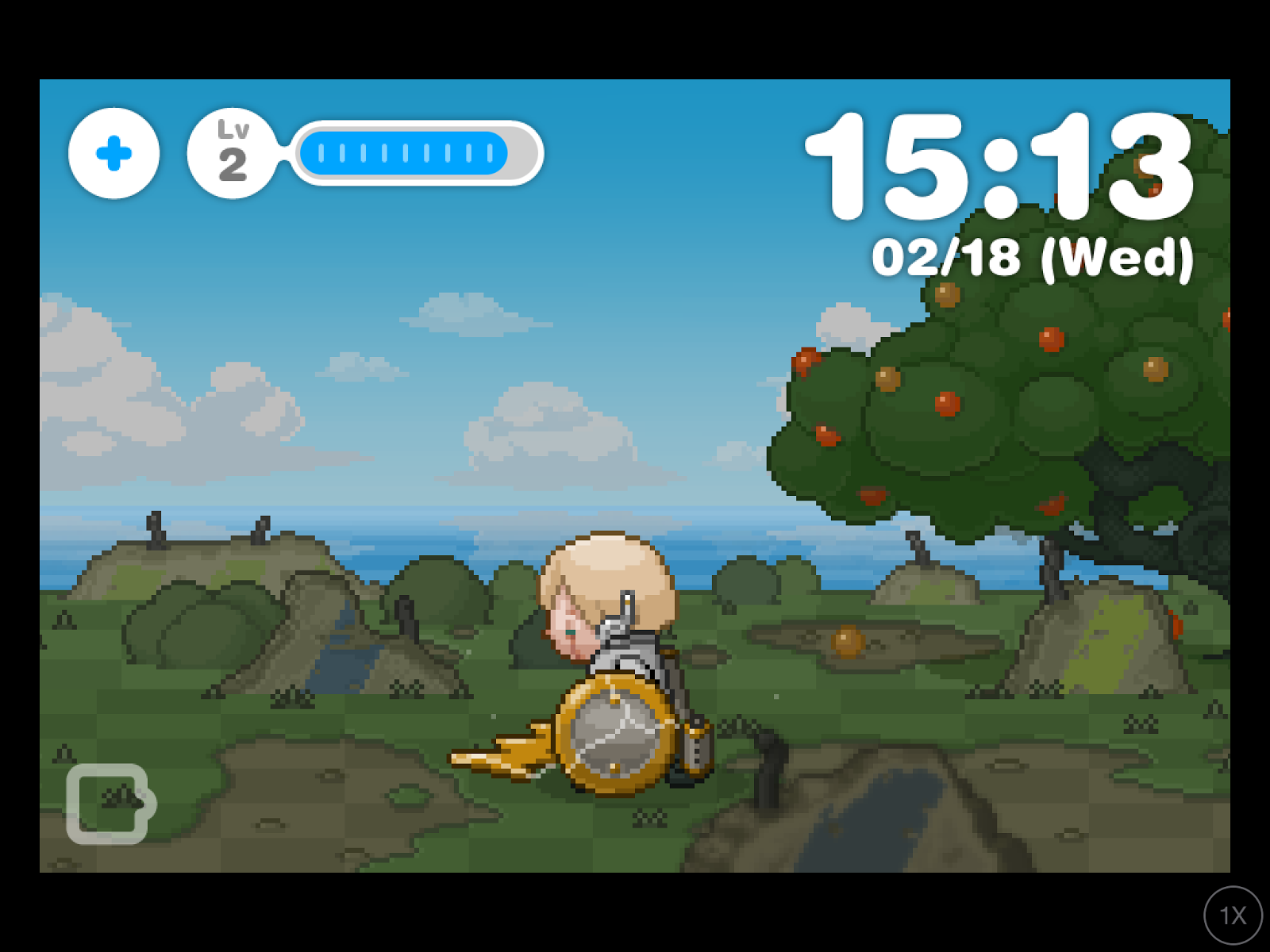 And that’s it. There’s nothing more. There’s a plot, perhaps, but it’s intentionally left open to all kinds of interpretations. There’s abstract dialogue but nothing you could explicitly read. Everything rests on your interpretations. The game expects nothing; It’s like having a JRPG Tamagotchi, but even Tamagotchi have more interaction and require more effort. 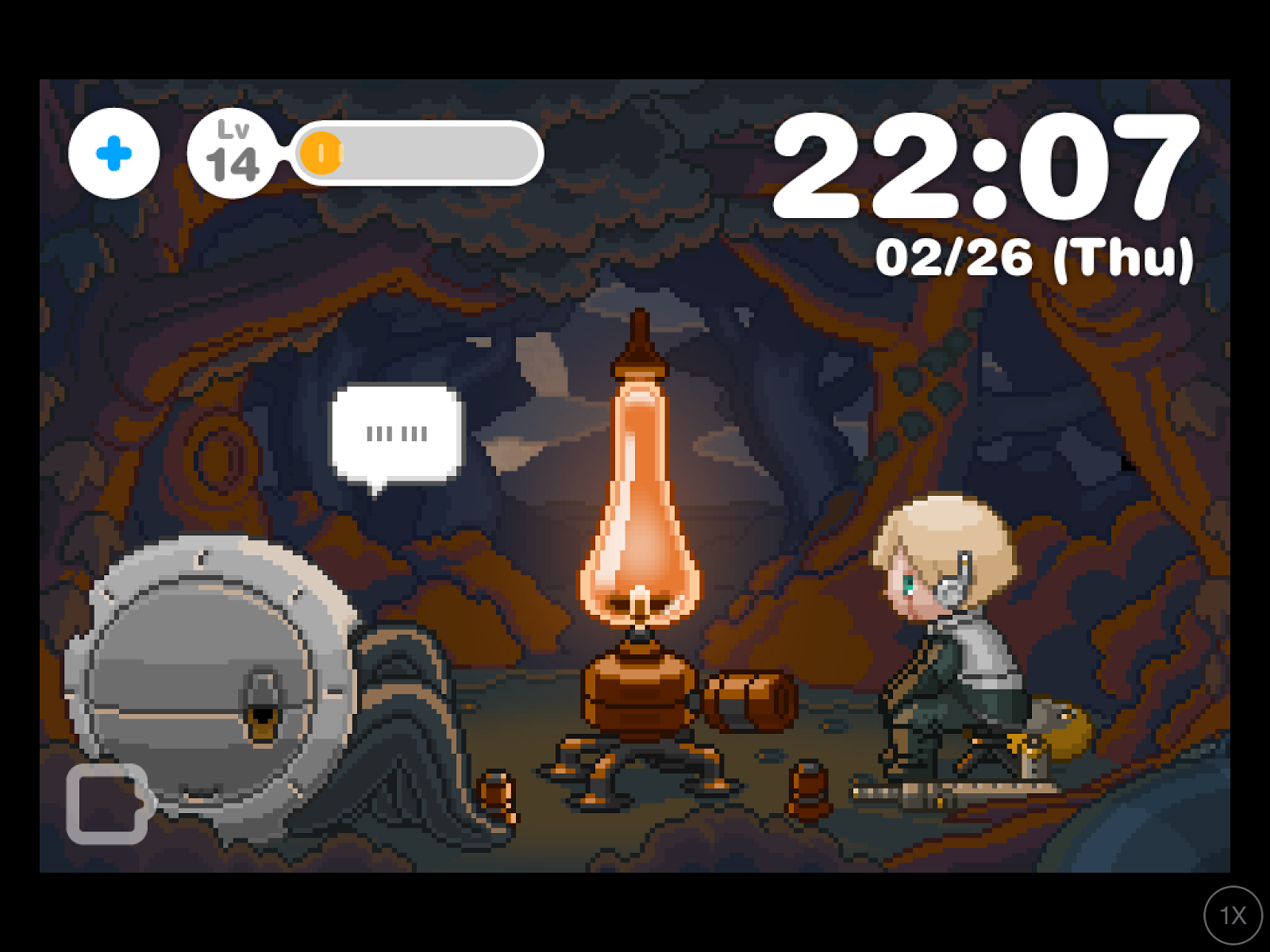 For a person labouring under intense stress and lacking free time, Dreeps offered a window to another world. I plucked away at my keyboard all day, and every hour or so I would check on how Ishida (my little android – you get to name it) was doing. It was walking down the long road, encountering hardships that I very much sympathised with. Sometimes Ishida needed to be picked up. Often I felt I needed picking up too. It was the best thing! In my pocket, I carried a window to this other world that effortlessly granted me a moment of tranquility in the middle of a busy day. In that world, a tiny android was slogging through its day much as I was slogging through mine. 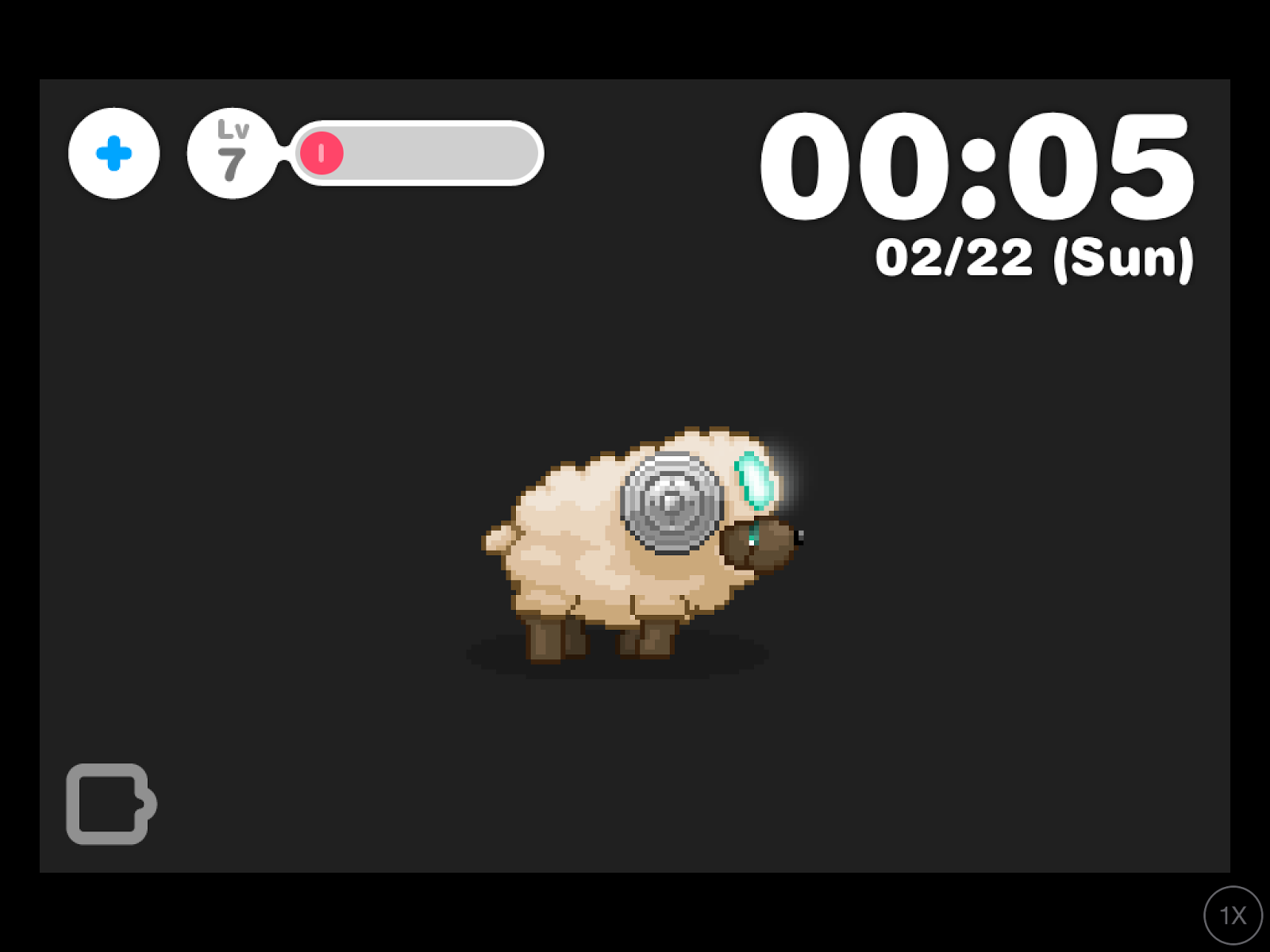 In her book Millennial Monsters, Anne Allison paraphrases the words of Akihiro Yokoi – the developer of Tamagotchi – who tells a story about “a Japanese OL [Office Lady] who, oppressed by her work situation and particularly an overbearing boss, relieves her stress by taking tamagotchi breaks.” Games are of course a rather universal stress-reliever (with the Windows solitaire and Minesweeper probably being the most ubiquitous examples) at workplaces around the world. But what differentiates Tamagotchi (and recent Japanese iOS phenomena like Dreeps, Survive! Mola Mola!, and Nekoatsume) from Minesweeper or Windows solitaire is that it taps into the very particular activity of caretaking labour. Tamagotchi, Dreeps, S! MM! and Nekoatsume are basically gentle and ultra portable compassion simulators. With them, taking a break is a small moment of simulated empathy and affection. There’s a pet or a friend or a character that exists under your care but – vitally – seemingly separate from you. Their world and their life exist (or at least maintain an illusion that they do) even when you’re not looking, so part of the charm of taking a break is in seeing what’s going on with your friend. They’re a plausible “other”, real to the extent that you can playfully project feelings to them. “[The Tamagotchi] relieves my loneliness,” as the office worker in Yokoi’s recounting says. 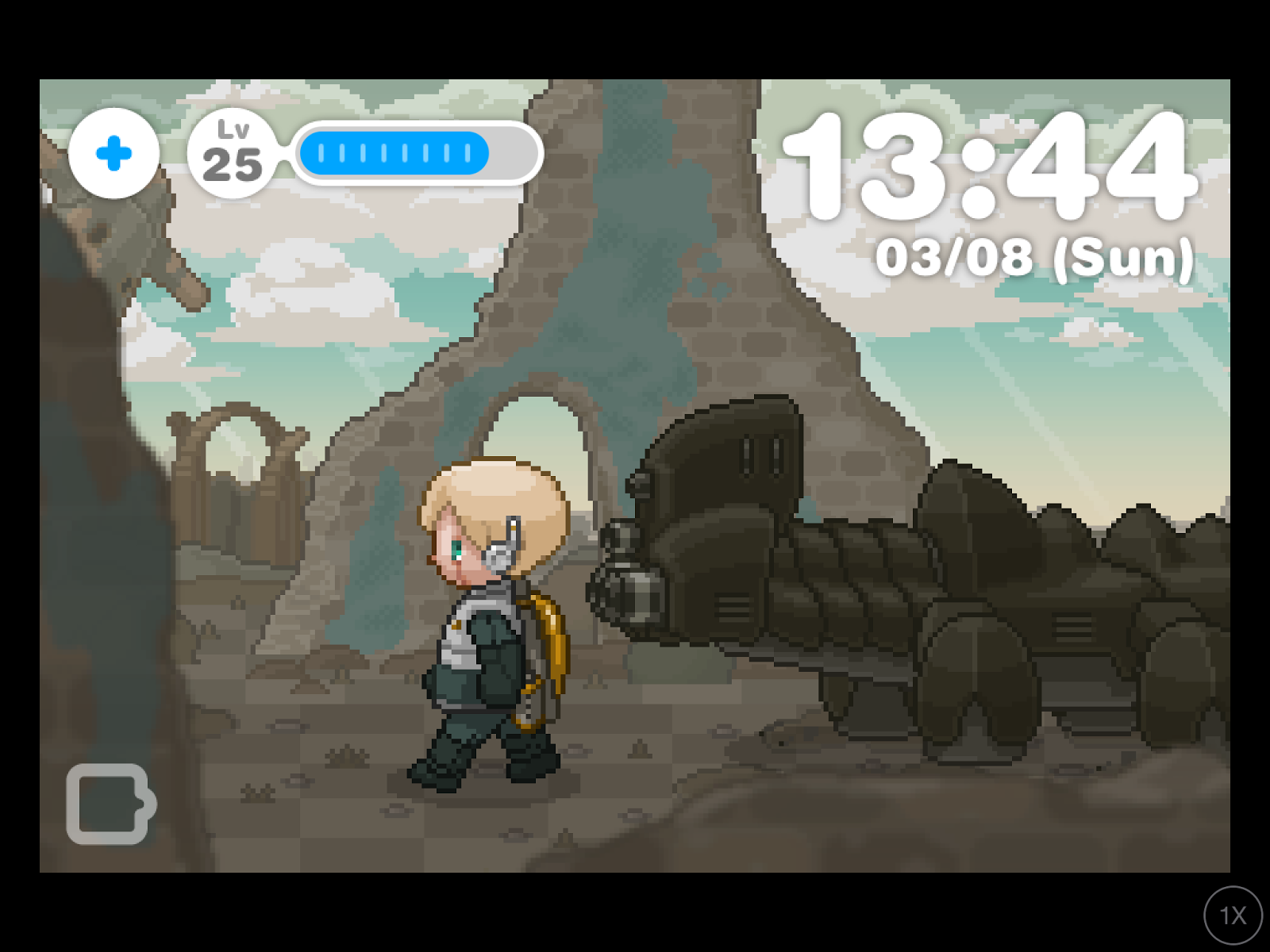 There's a lot of talk around videogames about the enjoyment of learning complex interaction patterns and mastering a whole body of rules. And that’s important! Minesweeper becomes super enjoyable when your knowledge of the basic rules and strategies is matched with a level of dexterity to accomplish the sweep in swift pace. But it’s also delightful to have a game where none of that is relevant. A game where you set an alarm – essentially make only one decision of any importance in one 24-hour cycle – and otherwise just let the game wash over you. Sometimes you just want to engage with a JRPG-like world in the middle of the day without having to dive into the spreadsheet pornographies that make up the clockwork engines of most games. Dreeps lets you do just that. It’s an illusion of a more complex game, and thus it lets most of the action take place in your imagination. 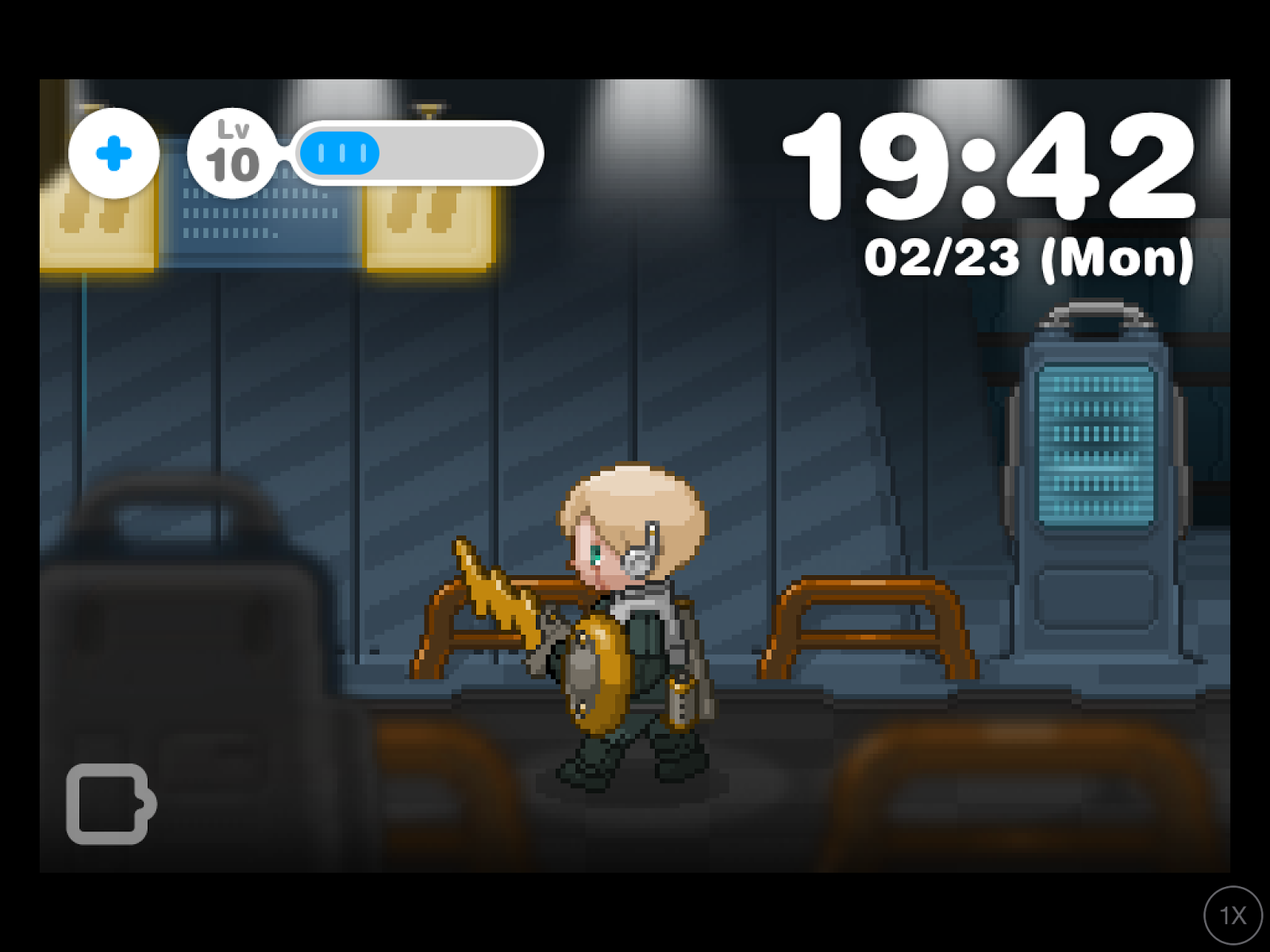 Furthermore, there's so much bad writing and exposition in videogames. Ham-fisted game dialogue and worlds built on Tolkien and testosterone quickly get old and awkward. As Tom Bissell writes in his book Extra Lives, “The impulse to explain is the Achilles’ heel of all genre work, and the most sophisticated artists within every genre know better than to expose their worlds to the sharp knife of intellection.”

You can literally read whole books (or at least books’ worth of content) in games like Dragon Age or Skyrim. And while I totally acknowledge that for a huge segment of fans that’s what makes fantasy stories interesting, I rarely enjoy it. I’m happy that there are interesting ruins of a city in a game but I don’t need to know who the city belonged to, why it was ruined, and what the socio-economical structure of the civilization that created it was. Dreeps’s open-ended approach to worldbuilding and storytelling is charming in a way that's simultaneously minimalistic and bold. You parse together your own interpretation. You make what you want out of the lives of the game’s characters and the world they live in. 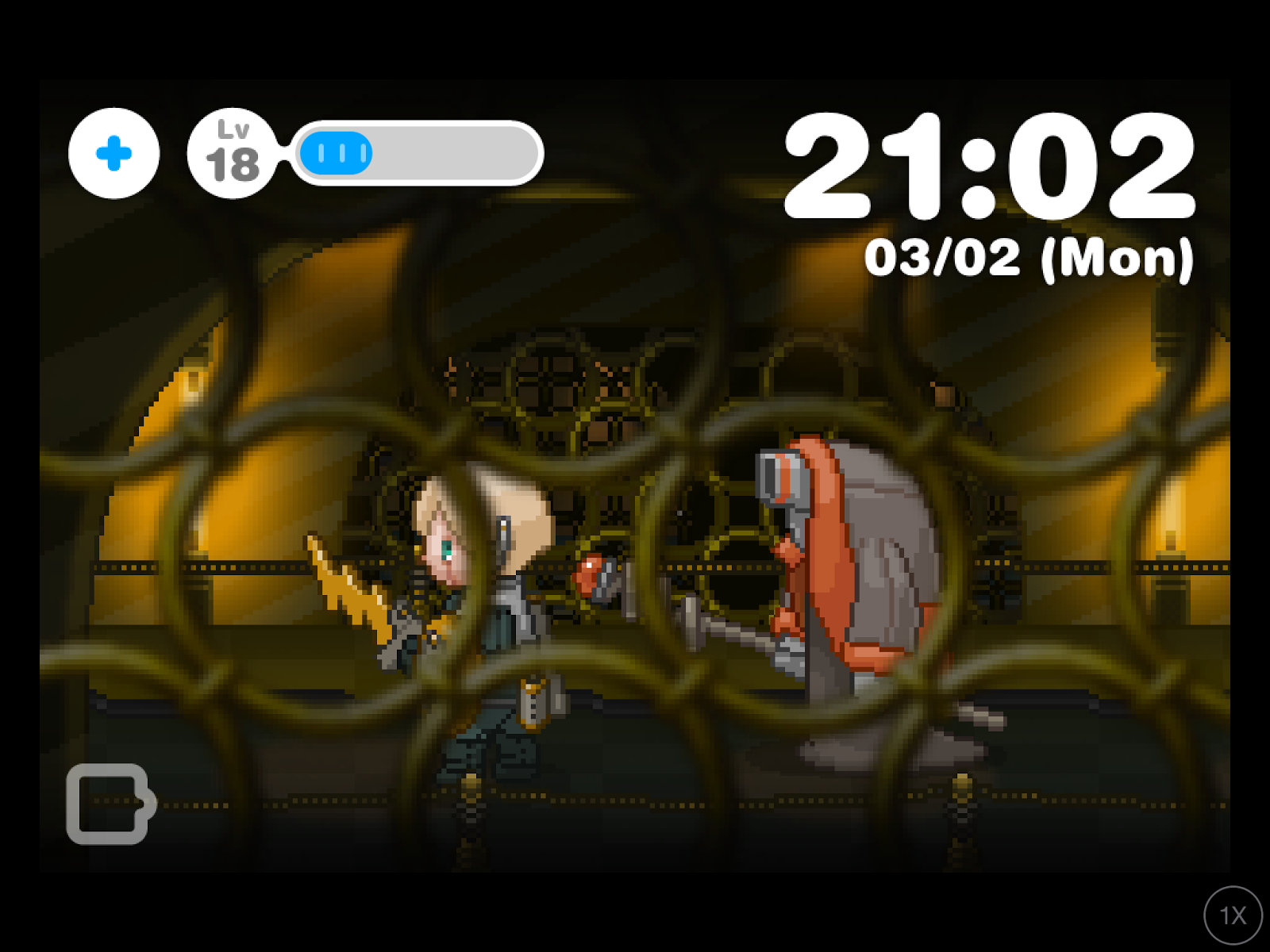 Dreeps lets you play – in a wide meaning of the term – without demanding (mostly) anything from you. The game is like a playful frame that you carry around: You don’t really need to do anything, yet you know that your character is walking with you, going through the exhausting motions of the day just like you are. The game is on even when you aren’t checking on it. Regardless of your input, your little android has made progress as the day goes by. You could check in on it anytime but you don’t need to.

I got happy just knowing I was sharing my day with little Ishida. I didn’t need to keep my hands on a controller or engage my mind with gameplay strategies or cascades of interaction in order to enjoy playing. I could call up the playful frame anytime – without the need of pulling up the game from the depths of the iPad. 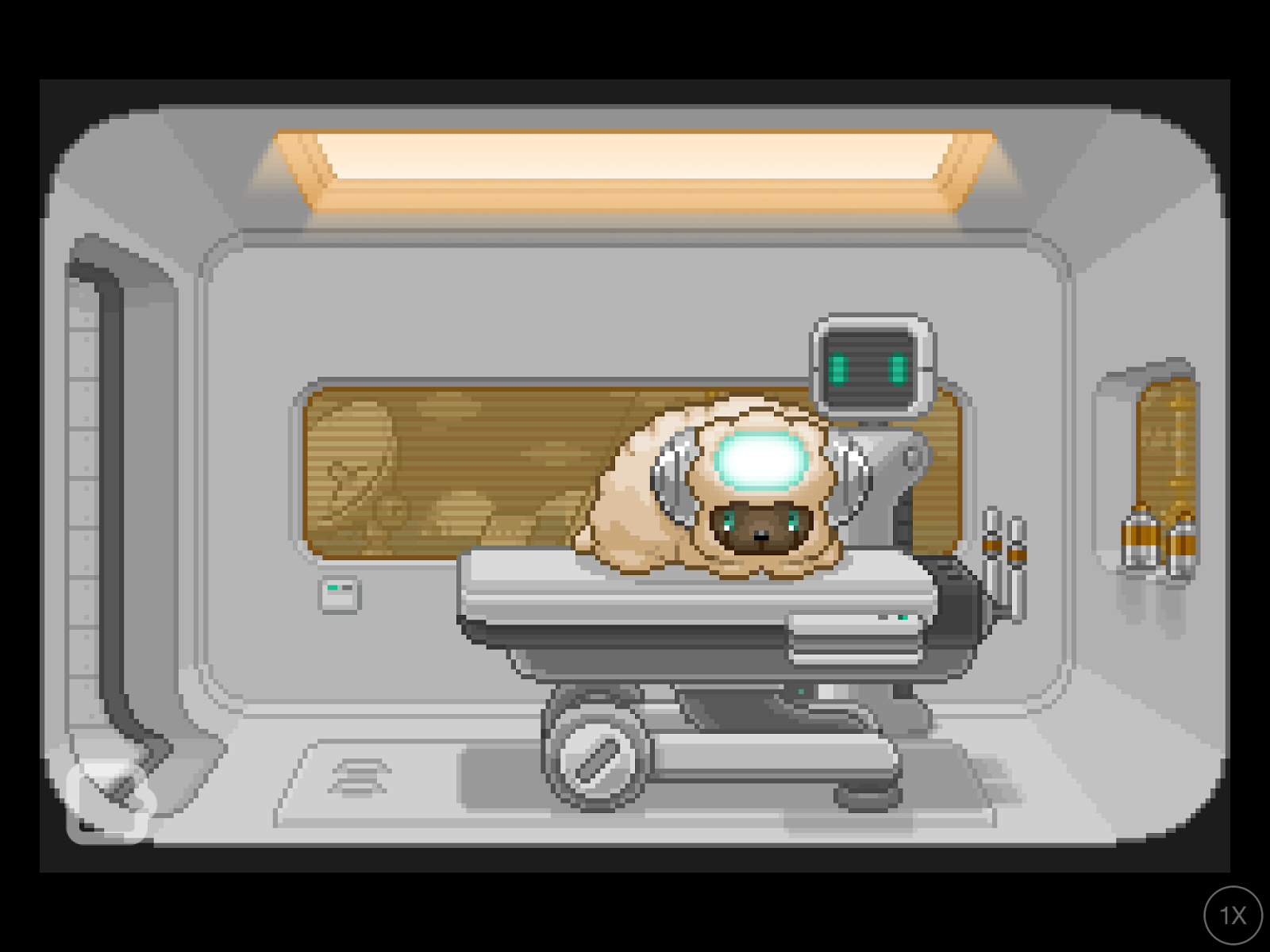 Dreeps, then, is not really much anything. You could argue that it's not much of a game, nor certainly a story or a JRPG. But when life is hard and you mostly just want to take a break from everything, checking up on how your little android is faring while you’re taking a breather is all that’s needed to make you feel a little less lonely. And that's a remarkable achievement for any piece of popular culture.
at 20:04