Emerging from the dusty chamber! 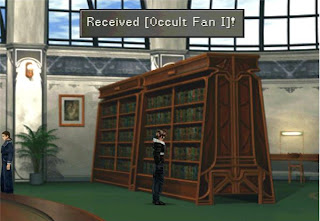 Balamb Garden Library. Almost related to this post!
I've just spent about 4 months reading over books and research papers on identity, identification, game characters, love, interaction and queer theory, and two months writing it all down as a 15-page paper tentatively titled "Pixel Love", to be published, I am told, in a book next year.

Officially it's about how we identify with game characters and whether or not we feel love towards them as we play games.

Unofficially it was a personal quest to find out why changing a single word between the international and Japanese endings of Final Fantasy X had such a big impact on me. And I think I finally have an answer!

I'll try to write about it sometime later, once I've recuperated from the time I spent on that article. Also, the article was written in Finnish, which means my English is probably a bit more off-kilter than usual for a good while. Endure, comrades!
at 16:59 0 comments

At the moment I'm in the final stretch of writing an unexpectedly laborous article for a book (on players, game characters and love) and unlike I had planned, combining blogging and writing isn't really happening.

Life returns in a few weeks' time. Until then I can be found in the word-mines.
at 00:09 0 comments