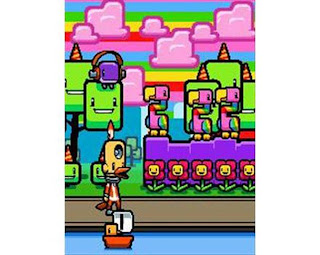 Beat City is the game I play in between everything else. It's possible to enjoy it in very brief sessions, and I'd actually argue the game is better when played only occasionally. In the end, there are not that many different stages so there's always the risk of things getting repetitive if you play for too long. I'm now somewhere around halfway through (though this is a rough estimate) so the game could throw in some surprises still.

With that said, I must confess to really liking Beat City. Hands down the best western rhythm game I've played that isn't centered around guitar-shaped peripherals. I'd even go as far as to say it manages to challenge my all-time favourite DS rhythm title Osu! Tatakae! Ouendan!, though O!T!O! still remains the reigning champion.

So far Beat City has had a catchy and upbeat chiptunesque soundtrack, decent gameplay and a charming visual style. My only complaints are the somewhat illogical way tutorials are handled, and the slightly repetitive stages.

(If you're wondering what Playing for Time is, see this explanatory post.)
at 12:50 0 comments

Oh, hey! I found a horizontal version of the ad I mentioned in my previous post. The Mystery of the Sword has been solved!

She is indeed holding a sword of her own, and is not being threatened by someone else! Yay, go Independent and Strong Wonder Woman Ripoff!

The independence and strength are of course blown to bits with her grip on the sword, but what the hell. Everyone knows really badass fighters extend their pinky fingers whenever holding a sword! Swordfighting 101, really.

While I was at it ("it" being "disabling adblocker and paying attention to ads for once") I noticed a few other browser RPG ads. And then I started wondering, what would happen if I took 20 minutes and searched the web for all browser RPG/strategy game advertisements I could find. Turns out there is a surprisingly hefty amount of dingy sites that cater to people looking for free online games, and while most of the sites I found were horrible and not particularly helpful, all of them contained plenty of awful ads. So, if anything, at least I have a hefty stock of advertisements to draw on.

Apparently browser games in general and browers RPGs specifically really do get advertised a lot with scantily clad women. Not having tried any of the games I saw advertised, I wonder how much of the "sexy" content shows up in the actual games. If a game is about medievally influenced resource gathering and micromanagement, I'm not entirely convinced the game would have a lot of skimpy outfits and balloon breasts. Who knows.

Anyway. Onwards! To the land of bad fantasy art!

From what I’ve gathered, Caesary is a browser-based RTS game in the vein of, perhaps, the Settlers-series. Action-oriented and thematically lighter historical strategy games that is. Its setting is based on the Roman Empire, though not having tried the game, it’s impossible to say how the game treats its historical subject matter. From what I managed to glean with a quick glance, the gameplay revolves around managing your resources, building an army and then, assumedly, using force to expand your empire.

I’m not terribly interested in the game, but I have noticed its ads on some gaming sites and webcomics. The first ad I saw was this.

Your typical muscleman with lots of armour and minimal amount of skin showing. Very warlike and bulging.

But there’s, of course, a female version of the same picture that seems to alternate with the male version each time you reload the ad. It depicts a scantily clad woman whose actual purpose in your army or government is not as immediately obvious as the male warrior’s.

She has some sort of breast armour (emphasis on breast, not armour), a leather(?) belt and star-patterned blue, uh, would those be thongs or just very very small underpants? Her upper thighs are exposed but she does have some armour around her knee and upper shin and calf, and a pair of red high-heeled boots, which must be exceptionally useful, whatever her occupation is.

The real jewel is her pose. Whereas the male warrior is very gaunt and brooding, she’s (funny how you can speak of the male via his assumed occupation, yet the female remains just “she” because she hasn’t been endowed with any tools or outside signs of a profession) twisted into the most submissive-looking, uncomfortable crouch. The look is complete with what seems to be makeup and an expression more commonly found on blow-up dolls. I am not impressed. Not with the stereotypical male war-brute, but especially not with the dolly no-purpose, all-show female. Whereas the male version of the ad seems to hint action and empire-building, the female version seems to rely solely on gamers checking out the game because “it had a hot chick in it”.

I’m not being fair, I know. This is just my reading of the ads, and maybe this tells more about me than the ads, but by gods, am I annoyed by that helpless-looking gal.

Edit: Now that I look at the pictures some more, there actually seems to be a blade in the female-version too. Instead of just portraying her carrying it, the sword is used to cast reflected light on her features. Maybe she’s holding the sword herself, or maybe some menacing Other is threatening her with it. If it was indeed her holding the sword, I can’t imagine the situation would be a lot more better than her being threatened by the blade, though. In both cases she is most obviously in a very vulnerable position.

She reminds me of Wonder Woman, actually. And not in a good way.

... waaait a minute! Having looked up that superdickery-link, I realized the likeness goes way beyond “kind of reminds”. That’s an obvious rip-off. Urgh, what a failure on so many levels. 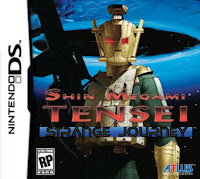 16 hours into the game. This is actually my first Shin Megami Tensei game, so what is old news for most SMT fans is all new to me. I'm conscious that I'm missing out on a lot of references and inside jokes, but so far the game has been extremely easily approachable for a newcomer.

It's nice to see a JRPG with a story that's a bit different than what the typical titles in the genre offer. The darker shades and weirder premise feels a bit wasted, though, since Strange Journey has surprisingly little story content. I mean, there are dialogue scenes and whatnots, but the ratio of grind versus story leans heavily towards grinding. After the lengthy opening cut-scene the narrative has relied heavily on little story snippets and short dialogue scenes, mostly taking place after you complete a dungeon, and most concerning some pressing matter the player has to tackle in order to advance to the next problem. I would like to see more than just "accomplish task X to gain access to area Y" type of content. Hopefully there's more story in the future. At least it would appear the actual plot is starting to pick up.

But don't get me wrong, I am enjoying the game like whut, despite the whine.

(If you're wondering what Playing for Time is, see this explanatory post.)
at 10:00 0 comments

For the longest time I've had this lingering sense of self-loathing about the way I play video games. I've always played this way, but I started feeling inferior for it when I was around 14 or so, when I noticed my habits differed drastically from those of my peers.

You see, I usually play for anything from 30 minutes to two hours at a time. But exceedingly rarely any longer than that. Two hours is pretty much the maximum I can pull off. After two hours I must take a break. I could continue, of course, but my ability to enjoy the game is greatly reduced. I start to get anxious during cut-scenes and zoom past dialogue with the fast-forward button firmly pressed down. I start making stupid mistakes, my characters take unnecessary damage and overall both my enjoyment and skill plummet. The duration I can play is also affected by the intensity of the game's plot and the overall state of the narrative. For example, if I've played for 45 minutes and I reach a climactic cut-scene that fades to black and heralds a new chapter in the game, or signals an ending to some sub-arc of the game's story, I have to stop. I feel that to continue from that point onwards would undermine whatever the game would show me next. I have to reset my emotional responses and sense of drama, even if I still felt otherwise fresh enough to continue. 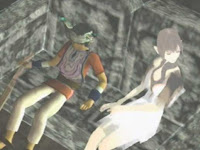 When the going gets tough, the tough head for the save sofa.
I've thought that there's something a bit wrong with me. Like, I have to train myself so I can keep up with everyone else. I thought my avoidance of long game sessions is just some fundamental handicap I have as a gamer.

Then I read this wonderful The Psychology of Games article from GameSetWatch.

Sure, I've always recognized that the primary reason for my reluctance to play for extended periods is that I get more out of a game if I play "fresh". And I've also wondered how running through a game affects game reviewer's views of games.

But still, it's nice to read a well-reasoned article about what exactly makes me like this, and to see that I'm indeed not really alone with this preference. And, most importantly, that there really is a very real cause for my behaviour.
at 16:42 0 comments